Loading...
Want to be a Mason? Talk to a Mason! Don't know a Mason, then Discover Masonry

Williams "Bill" A. Rathbun, IV, 59, passed away Thursday morning, Dec. 26, 2019, at Bassett Medical Center in Cooperstown, surrounded by his family.

Bill was born on Oct. 26, 1960, in Cooperstown, the son of Williams A. Rathbun III and Virginia (Marr) Rathbun of Springfield. He was raised in the Springfield area and graduated from the former Springfield High School in the Class of 1980.

Following high school, Bill worked as a general contractor and undertook many projects of varying types for many local families.

In the spring of 1996, Bill joined the teaching staff at Milford BOCES, teaching students career skills in the manual trades. He first taught "Career Pathways" in special education which consisted of various career choices especially suited to his students desires and talents. A few years later he was asked to teach Welding and Auto Tech, which he did for more than ten years. Most recently and for the balance of his 23 plus years at BOCES, he taught Natural Resource Occupation, which involved such topics as logging and heavy equipment operation. Bill loved his students and his job. He often said he was born to teach at BOCES.

When not at BOCES, Bill put in long hours assisting his wife, Anna at "Finders Keepers," her antique and second-hand store on Main Street in Richfield Springs.

Bills hobbies mirrored his work. He loved going "antiquing" and working on and fixing just about anything that ran, clocks, watches, phonographs, gas and electric motors and antique "one-lung" engines. He was known for his ability to fix just about anything and was always willing to stop what he was doing to help others in need. He was community minded.

Bill is survived by his wife, Anna (Fort) Rathbun of the Town of Springfield; son, Williams "Alden" A. Rathbun V, also of Springfield; mother, Virginia Rathbun, now of Rotterdam; sister, Priscillia Burgess (Robert) of Rotterdam; niece, Lily Burgess; brother-in-law, William Fort and his children, James and Rachael of the Milford area; brother-in-law, Steven Yager (Cheryl) and family; and his "sister-in-law," Diane Mondore (Jerry) of Colorado and their family.
He was predeceased by his father, Williams A. Rathbun III, in 2000.

The family will be present to receive friends from 11 a.m. to 1 p.m. Monday Dec. 30, at Tillapaugh Funeral Home, 28 Pioneer St., Cooperstown.

Funeral services will follow the visitation at 1 p.m., officiated by Ronald Fralick, Pastor of the Cherry Valley Presbyterian Church.

Burial will occur in Springfield Cemetery in the spring. 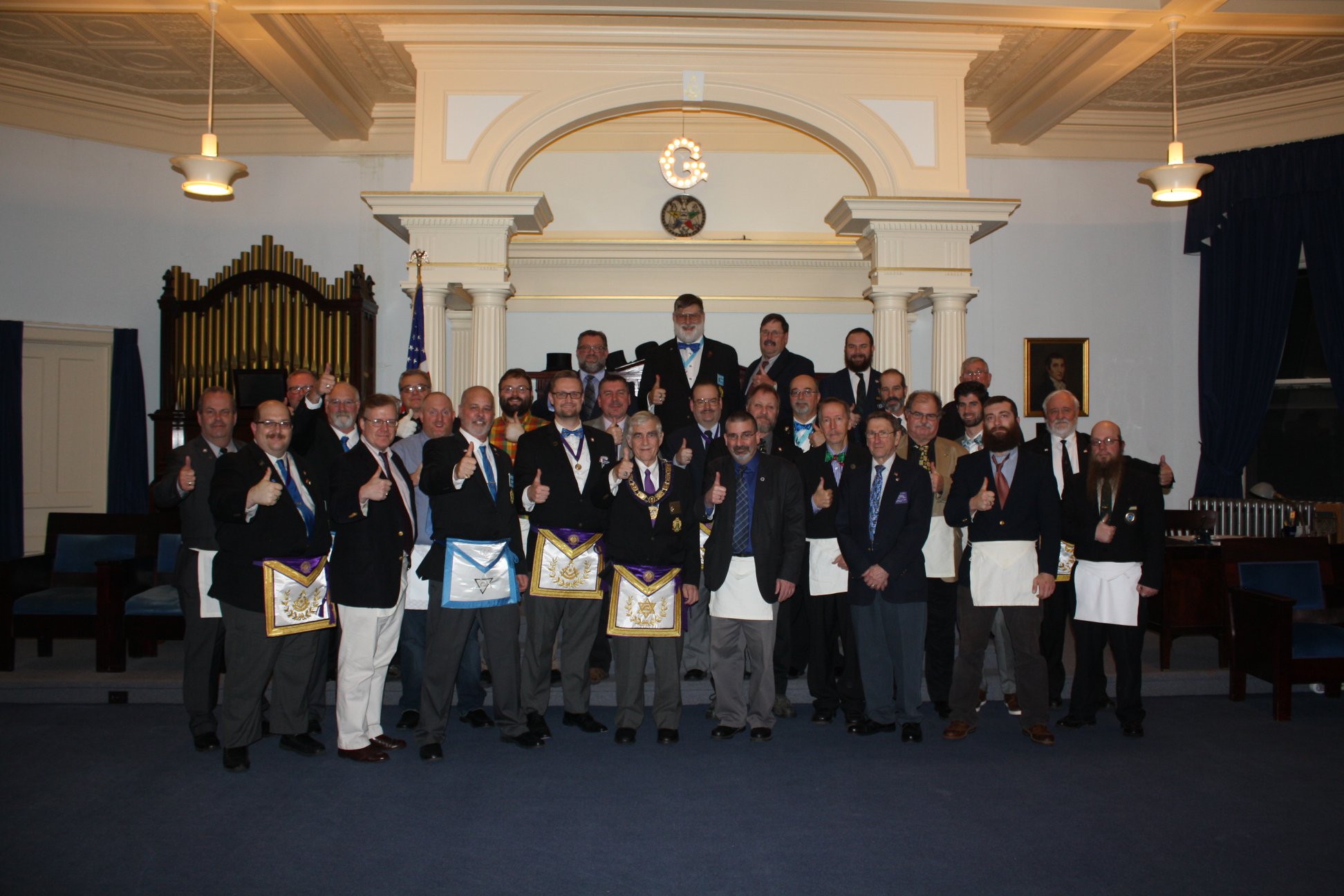 Delaware River Lodge annual Past Masters Picnic that was held on Sunday, September 9 at Duane LaFever's camp in Bovina Center 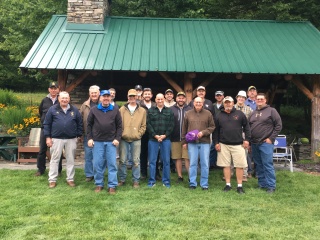 Saturday August 4,the annual Masters and Wardens Golf Tournament was held at Colonial Ridge Golf Course. The threat of rain never materialized and a fun day was had by all.

Here are the results

Next years Tournament will be August 3 at Colonial Ridge. Make plans now and come and enjoy a great day of golf and a wonderful dinner

It is time once again to begin a new masonic year. As your District Deputy Grand Master I will again be visiting every lodge and bringing our Grand Masters message and some masonic light as well. Many of you expressed an interest in having another exciting game to play this year. I received much feedback on my last game and had to ponder long on what to do to improve it this year. One of the biggest disappointments was hearing that our younger Brothers did not want to travel to play in last year’s game. So I thought long and hard on what sort of a game I could create that would get these Brothers involved, but not require them to travel. I created a puzzle game that would require Brothers from different lodges to team up to solve, but that could be done via email or social networking and was quite pleased with it. Use last year’s cipher to decode the following to get started (NOTE – If you are new or did not play last year the document describing the process can be found here: http://osdmasons.org/article133-DDGM-Masonic-Grail-Quest-Geocache-Challenge and the question on the coin was “What makes you a Mason?”) Get the new challenge: Game 2 Letter With Graphics

This past Saturday we held our 1st annual District Charity Gala at Justine's in Cobleskill. I'm pleased to share that our event hosted 30 people and was a success! The food was spectacular, drinks were flowing, great music and we all enjoyed fellowship and time with our guests. Most importantly, we were able to raise $220 to donate to Victim's of Traumatic Brain Injuries. Brother Steve Garreau and I are already planning next year's event, and will finalize details to share with you all in the fall.

We had such a great time, we have already booked our district summer party at Justine's for the last weekend in August. This will be a clam bake, and all are invited. We will share more details in the spring, but I am hoping we have a large turnout!

Keep your eyes on the district calendar for upcoming degree work and events around our district. It seems as more Lodge's are utilizing the district email system to keep everyone informed with their communications and events, and this is great. KEEP IT COMING!

The District Association (formerly Masters and Wardens Association) and Charities Corporation will be holding a combined meeting in late February / early March. We need to discuss changes to the 2 groups, and finalize details for the Murder Mystery Dinner as well as get going on the golf tournament. I will confirm a date and time with our officers this week and will keep everyone informed. It is important that each Lodge be represented at this meeting.

Saturday 2/25 is our District Ritual Competition. Our AGL, VW Adam Sokolowski has provided details to each Lodge, and I'm sure will put out reminders soon. This year's work will be from the EA Degree, so all masons can participate.

Hope you all have a great week!

Good morning everyone, happy Cyber Monday! I trust everyone had a wonderful Thanksgiving, and was able to spend some time with your loved ones.

Just an update for our district events and degrees-

Tonight, Schenevus Valley Lodge #592 is hosting a 2nd Degree, Lodge opening at 7:30PM. I am sure they could use help filing the sides, possible conductors, and making the Temple full for a good showing for their new FC's. Please contact their Secreyary Steve Ratner to confirm your attendance.

Next week-
Monday, Cobleskill Lodge will be hosting a rehearsal for their 1st Degree, which is scheduled for Tuesday evening. Please contact W. Kris Kinnear if you are able to make it.

Friday, 12/9 is our Masters and Wardens Association Meeting. Dinner is being served by Schenevus Valley Lodge, please contact RW Rick Scheiner asap to RSVP dinner. Meeting will be at 6PM, in Schenevus. On the agenda- finalizing details for our Charity Ball in January, working for the murder mystery dinner in April, and laying the ground work for the golf tournament. Also, our DDGM mentioned during his visits that our district will be going through changes soon. We need to start to prepare ourselves for these changes. Remember, ALL MASONS are invited, but voting power is reserved for sitting Masters and Wardens.

If you would like an event added, simply email Brother Bruce Van Buren with the details, and he is always quick to make changes. Also, you also receive my crazy Lodge email updates, and Brother Bruce always posts these online for all to read. Keep your message out there, get him info and we can spread the word.

I look forward to seeing everyone next week at the M&W Meeting. Be there and be square!

You may notice that I skip the 4th Thursday of the month.
Our church serves dinner at the Lords table every 4th Thursday.
I am the dish washer for our church. 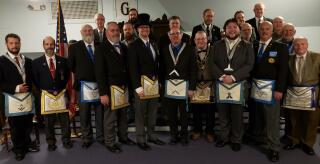 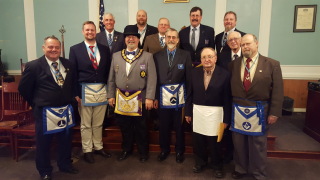